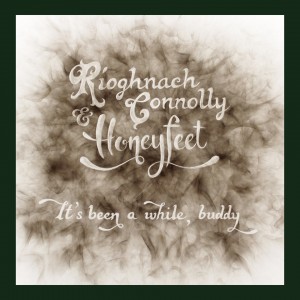 Record Label
We Are Stardust

Still residing as BBC Radio 2 Folk Singer of the Year, Ríoghnach Connolly's taste for musical adventure is eclectic. Along with her companion players, Honeyfeet, they collectively drive a broad terrain of musical textures from esoteric protest songs to foot-tapping and floor-thumping dance rhythms.

Ríoghnach and the Honeyfeet ensemble are equally proficient in headlining festival stages as they are stripping back to sublime obscure jazz on theatre stages.

Deadpan wit courses through Connolly's veins. Known for her broad, smiling on-stage banter, she often describes the delight of her multi-cultural voyage of discovery while pushing aside life's banality in favour of mischievous energy and creative joy.

Traditional and folk are fundamental in Connolly's musical canon. Coming from a long line of singers on both sides of her family, she channels the music of her grandparents and can draw from a breadth of styles and folk traditions across the world. In her voice, you can hear equal parts Sean-nós Caoineamh, west African griot ululation and American deep-south resonance. She performs in the more traditional form with Stuart McCallum as The Breath whilst corralling her more heavily layered and theatrical songs into her performances with Honeyfeet.

An eclectic troupe based in Manchester, Honeyfeet's heavy sound spans from the bountiful to the subtle, with everything from big-band swing to Alabama blues-tinged folk, all held together by the powerful vocals and flute from Ríoghnach.

From the start of lockdown, they used their time to write new material and explore multiple genres of music. Then, on the gradual journey back to live audiences, in May 2021, they re-opened Manchester's Albert Hall taking the room by storm with a long-awaited return to the stage.

For more than a decade, Honeyfeet have been 'on the road'. When lockdown rules didn't interfere, the norm was headlining stages at Shambala, Beautiful Days and Moovin Festivals and wowing audiences at Glastonbury, Boomtown, Wilderness, Secret Garden Party and Kendal Calling.

During the lockdown, the band invested their time recording a new album, stretching further than before into string arrangements, greater dynamics and implementing sparse introductions to Ríoghnach's vocal stream, where her poetic consciousness gives rise to honest, personal, heartfelt lyrics.

This obviously means the new Honeyfeet album, It’s Been A While, Buddy, is about to fill the shelves and hit the airwaves, with bonus tracks and lots of lovely gigs to bring the magic closer to you!