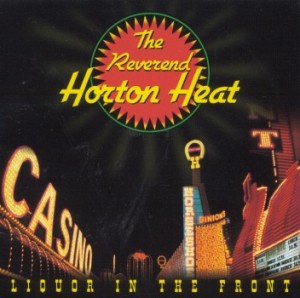 1994’s ‘Liquor In The Front’ gets even more aggressive than it's predecessor - heavy, even - sonically, with production by Ministry’s Al Jourgensen and the high-velocity opening pairing of the high-velocity instrumental ‘Big Sky’ and the blistering lament ‘Baddest Of The Bad’. The highest selling of the Rev’s first three albums, ‘Liquor In The Front’ was originally co-released with Interscope Records, with the album hitting #18 on the Billboard Heatseekers chart and the single ‘One Time For Me’ hitting #40 on the Modern Rock chart. In the words of AllMusic, “for sheer crank, nothing in his catalog can touch it.”

Big Sky
Baddest Of The Bad
One Time For Me
Five-O-Ford
In Your Wildest Dreams
Yeah, Right
Cruisin’ For A Bruisin
I Could Get Used To It
Liquor, Beer & Wine
I Can’t Surf
Jezebel
Rockin’ Dog
The Entertainer

Reverend Horton HeatSmoke 'Em If You Got 'Em - 2022 Reissue