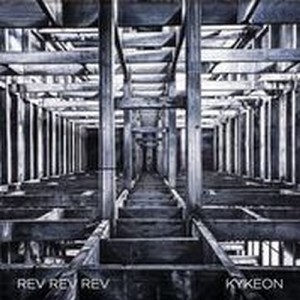 Kykeon is the long-awaited third album from Italy’s finest shoegazing noise-rockers Rev Rev Rev, following on from their 2016 LP Des Fleurs Magiques Bourdonnaient. The band say of the new record: “Kykeon is about exploring the obscure. It’s a ritual descent into the underworld, but also a flight through the cold spaces amid the stars. There’s stripped-back song structures, trance-like drumming, fuzzy reverberated guitars, abrasive atonal sounds and tonnes of feedback.” Kicking off the album with a relentless torrent of noise is ‘Waiting For Gödel’ and ‘Clutching The Blade’: two cuts of blistering psychedelic noise-rock that take no prisoners.

The band say of the latter: “Clutching The Blade’ is a good snapshot of our sonic virulence. Among the new songs, it’s the one that truly conveys the energy of our live show. The song itself is about being trapped in the quicksand of a certain situation and the appalling feeling that the more you struggle, the faster you sink.” This sense of danger and losing control runs throughout the album, manifested perfectly in the claustrophobic noise-rock of ‘Sealand’ and ‘Egocandy’: primal and piercing, both tracks are dominated by screeching feedback and slabs of unforgiving fuzzed-out guitars that are more than capable of blowing both amplifiers and eardrums. Kykeon isn’t always quite such an intense affair though. Tracks like ‘Summer Clouds’ and ‘Adrift In The Chaosmos’ deal in a sublime Loveless-esque shoegaze sound; Laura Iacuzio’s shadowy, ethereal vocals emerging through all-consuming walls-of-noise. Then there’s the murky, ritualistic drone-rock found on ‘Gate Of The Dark Female’ and ‘One Illusion Is Very Much Like Another’ which keep hold of the band’s trademark fuzz onslaughts but gear them more towards explorations into repetition and texture. ‘One Illusion…’, especially, is bolstered by modular synths, DIY guitar pedals built by guitarist Sebastian Lugli and the use of a tanpura, a stringed drone instrument originating from India. Their finest work yet, Kykeon proves that Rev Rev Rev – based in Modena, Italy – are without a doubt one of the finest bands today to be carrying the torch for shoegazers far and wide, old and new – praise that’s already been justly lauded on them countless times since they formed back in 2013