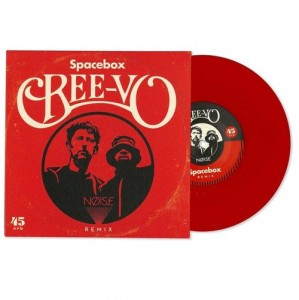 In 2021 Bristol hip-hop duo Ree-Vo released two singles from their forthcoming album ‘All Welcome On Planet Ree-Vo’. The first was the electro-fused, LFO-surfing ‘Combat’ with a remix by techno legend Surgeon. The second was the dark, submersive ‘Groove With It’ remixed by New Jersey’s legendary Dälek and ‘Protein’ remixed by The Bug.

Ree-Vo begin 2022 in contrast with this their hookiest track on their album, a party throwing chorus spinning tipsy visitors around the intergalactic control booth of mission control. “Lift off, blast off, shirt off, pants off, bra off, Dance off! Naked in the dance hall SPACE BOX!” is the beamed mantra, rapper Relly transmitting to all occupants of the galaxy. “We wanted to make a hedonistic and colourful dancehall track, a bold response to the suppressive circumstances of the last two years”.

Helping them on this seven’s mission are two remixes, one by NØISE (the musical collective of Joe Cassidy, Shepard Fairey, Merritt Lear and John Goff) and BATBIRDS (the duo of Joe Cassidy and Aaron Miller). Common to both of course is Joe Cassidy who recorded for Dell’Orso (as well as Rough Trade and Dedicated) as Butterfly Child. These mixes were made at the end of 2020, the record sent off to print in February 2021, five months before Joe’s incredibly sad departure from this planet, at least physically. So for all involved it’s a very bittersweet release, but another piece of art that Joe was undoubtedly thrilled to be involved with.