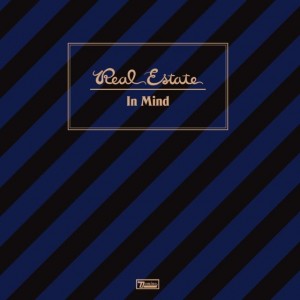 On In Mind, the fourth full-length record from Real Estate, the band fine-tunes the winsome songwriting and profound earnestness that made previous albums - 2009’s Real Estate, 2011’s Days, and 2014’s Atlas - so beloved. Recorded in Los Angeles with producer Cole M. Greif-Neill (Julia Holter, Beck), In Mind delivers the same kind of warmth and soft-focus narratives that one has come to expect from the band - pastoral guitars, elegantly deployed arrangements, a sort of mindful melancholy - but there is also a newly adventurous sonic edge to the proceedings.

It offers a mild shifting of the gears, positing a band engaged in the push/pull of burgeoning adulthood. Reflecting a change in lineup, changes in geography, and a general desire to move forward without looking back, the record casts the band in a new light - one that replaces the wistful ennui of teenage suburbia with an equally complicated adult version.

Andy says: One of Piccadilly Records' favourite janglers return with another swooningly resigned ache-a-thon, this time with added quirk and expanded dynamism thanks to the addition of the splendid Julian Lynch on lead guitar.