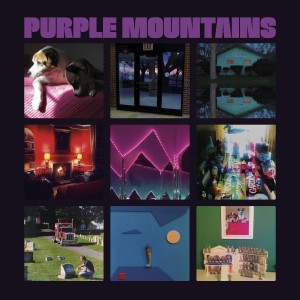 “Well I don’t really like talking to myself, but someone’s got to say it, hell...”

You know this voice. An old friend has returned. It was some years back that you dropped the needle on the record and heard it say, “No, I don’t really wanna die...” Like so many lines you couldn’t possibly have guessed the finish to, it’s now among the flat natural-born good-timin’ faves that you sing along with in the jukebox inside your head. It’s loaded up there along with at least a couple dozen others from Silver Jews, whose classic run was made somehow finite in 2009, when the voice himself, David Berman, announced his retirement from music. Ten years have come and gone since then. Where the time goes, we do not know. What do they say about old songwriters? We don’t know that one either, okay? We’re not good with jokes – we’re just glad that there’s always more songs to be written and sung. That’s what raised up Purple Mountains for all of us, after all.

Yes, Purple Mountains is the new nom-de-rock of David Berman. Purple Mountains is also the name of what will be known as one of his greatest albums – full of double-jointed wit and wisdom, up to the neck in his special recipe of handcrafted country-rock joys and sorrows that sing legendary in cracked and broken hearts. The songs are produced impeccably by Woods’ Jarvis Taveniere and Jeremy Earle, buffed up like a hardwood floor ready to be well-trod upon for an evening of romance and dance. And then…

What is 10 years? What are 50? How is everything anything in the eventual blink of eternity? The songs of Purple Mountains are a potent brew, stitched together from lifetimes, knitting the drift of the years with the tightest lyric construction Berman’s ever attempted. Honesty is archly in the air, but lines of incredible bleakness somehow give way to playful distraction and the hiding of surprises for close listeners. Even still, as the songwriter once wrote, “every single thought is like a punch in the face.” It won’t take long after slapping the record on the platter for you to hear that this is one of THOSE albums. There’s breakup records. There’s apocalypse records. Then there’s Purple Mountains.

The portrait is David Berman’s most to-the-bone yet, very frankly confessing a near-total collapse from the first moment, then delving into the layers of nuance with twin lazers of personal laceration and professional remove. This etches a picture that cries to be understood in the misbegotten country that made everything great about Purple Mountains. America’s fate is that of its treasured icons: the cowboy, the outlaw, the card sharp and the riverboat gambler, who all face simple resignation in the end. There are no perfect crimes. Berman’s poet-thief of so many precious moments, now stripped and chastened, recalls his latest lowest moments in perfect detail, hovering ghostly above the tumescent production sound as it echoes with tragic majesty and the sound-fragments of former glory, evoking the defeated-king era of late Elvis, soutern-fried and sassy still on his countrypolitan way down, and somehow still solid-gold at the bottom.

Berman’s songwriter’s bone’s never been laid more bare, either – if redemption doesn’t come on the lyric sheet, the act of putting these songs into singing, dancing form allows them their finest end – to provide infotainment for others, embodying moments of life and truth via music that elevates with disarming warmth and a reassuring commonality, even as David himself stands outside the communal campfires.

Where are you tonight, America? The things that used to be have slipped away into the darkness without you knowing it, and your children are wandering in a blasted landscape, with only Purple Mountains left to comfort them, and David Berman’s shattered fables for company.

Andy says: An incredible record with just the saddest/funniest lyrics. David Berman was a poet as well as a genius song-writer and for me, this is even better than anything he did with Silver Jews. Backed by Woods, one of my favourite bands, who play more Americana than psych here, there is not one weak track on show. David Berman RIP.

1. That’s Just The Way That I Feel
2. All My Happiness Is Gone
3. Darkness And Cold
4. Snow Is Falling In Manhattan
5. Margaritas At The Mall
6. She’s Making Friends, I’m Turning Stranger
7. I Loved Being My Mother’s Son
8. Nights That Won’t Happen
9. Storyline Fever
10. Maybe I’m The Only One For Me