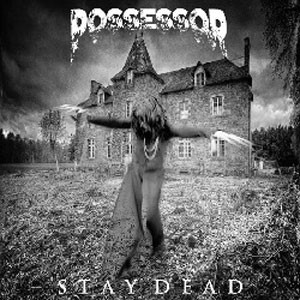 "Something sinister is looming in the mist…"

Following the success of last year's debut album, "Electric Hell", London’s occult metal monsters POSSESSOR are back with a highly-anticipated follow up in the shape of their new EP, “Stay Dead”.

Maintaining the trio's love for all things vintage and terrifying, the four tracks on display here crackle and explode like it’s the band's last day on earth. Malevolent high speed thrash riffs tumble and crash into a swamp of sludgy old school British doom, bringing to mind the savage lo-fi lunacy of Bathory and Venom with the hooks and claws of vintage Electric Wizard and 90s filth such as L7 and early Nirvana - all as if beamed to us straight from the set of Texas Chainsaw Massacre.

Cloaked in a black and white sleeve that brings to mind both Black Sabbath and the hammiest of Hammer Horror flicks, “Stay Dead” will secure Possessor's place in the mysterious annals of British heavy metal, and is a delicious taster for the band's next full length which currently lies festering in the crypt…ready to be resurrected.

“Stay Dead” will be released on 12” clear vinyl in an edition of 500. this is the second release on the Creepy Crawl label…