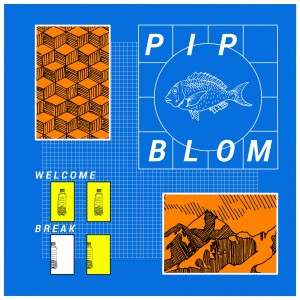 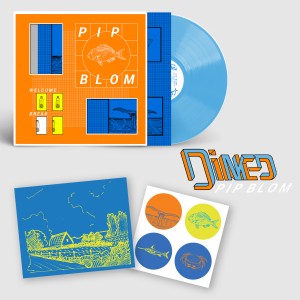 There are approximately a great deal and very many ‘Welcome Breaks’ scattered throughout the sprawling motorways of the UK.

Now, regardless of whether that statement’s true or not… when life’s become a series of long-stretches and welcomed breaks, it’s to no avail that sometimes all it takes to alleviate spirits is the simplest, of experiential indulgences.

Be it the buzz of an overly exhausted tour van, or the green light and smell of sausage rolls in the near Beaconsfield distance... inspiration can be found in the funniest corners of this place we call home; and it’s in the heart of day-to-day simplicities and sprawling services, that we gladly receive Amsterdam’s beamy-grinned, indie-pop powerhouse Pip Blom, back into lives.

Following an extensive touring schedule which saw the Dutch 4-piece roam over field, oceans, and Glastonbury’s John Peel stage following the release of their debut record ‘Boat’, any such cool-cat would be forgiven for wanting to kick back, and indulge in some very appreciated, time off.
As is often the way, such timely-abandon cannot be said for Pip Blom however, who immediately began to gather up all her soaked-up inspirations taken from the road, and manifest a re-energised sense of self, and ritualistic songwriting.

Cosying down in a room of her parents’ house (which she shares with her brother and fellow bandmate Tender Blom), Pip, a self-confessed “fan of deadlines”, set aside three months to write twenty songs- sixteen of which
were to become demos for the band to structure and flesh out, once in the studio together.

It’s at this stage in our indie-fairy-tale that things start to get ever so 2020. Whilst the world was suddenly put on hold as a result of Covid-19, Pip Blom, who’d made plans to return to their favourite ‘Big Jelly Studios’ in Ramsgate, England, were suddenly faced with a very sticky, kind of dilemma. “We’d scheduled to go into the studio in September but summer started moving and there were a couple of countries not allowed to go to the UK anymore... a week before we had to go, the Netherlands was one of those countries”- notes Pip.

Sentimentalities, and pre-established friendships (by way of Grammy award-winning engineer Caesar Edmunds) took president, and the decision was made to pack up their gear and a variety of board games and exercise equipment, all in preparation of a fourteen-day quarantine faced upon arrival in the UK.

In total, three weeks were spent recording what would become the groups sophomore release; a Al Harle engineered love-affair which was self produced entirely by the band and culminated in a legally intimate, fully seated album play-back, to six, of Ramsgate’s most chorus-savvy and ‘in the-know’ residents.

Getting out of their hometown and into an environment which removed all notions of “normality” or personal space, was an atmospheric godsend in terms of motivation; an act which encouraged Pip Blom to re-adjust and buckle down as a unit again, after spending so long in mandatory isolation.
Much like the danceable-realism of Pip’s beloved Parquet Courts, the key to an album well done, is the balancing act of fine-production, and capturing that core live-essence we all miss. “We always play one live track three times and after we then build that track in the studio” says Pip, assembling together amalgamated “live-energies” in order to produce a capsule of environmental-satisfaction, that can be appreciated during any time of day, or life’s little moments.

Actively seeking out moments of creative-authenticity, be it via a slightly out-of-tune guitar or proudly-fuzzed vocals, Pip Blom take us back full circle and introduce us to their ‘Welcome Break’- an eleven-track release which resonates with about as much decisive allure as it’s ‘Boat’ precursor, but this time with a bit more contemporary chaos to boot.

Where ‘Boat’ reckoned as a fresh-faced, yet gloriously fearless game changer, ‘Welcome Break’ is the self-assured older sibling who, with an additional year or two behind themselves, isn’t afraid to speak out, take lead, and instigate a liberated revolution-come-bliss-out.

Lead single’s ‘Keep It Together’ and ‘You Don’t Want This’ are glistening masterclasses in feel-good chorus- the very kind of coming-of-age relatability where a soul would want to let down their hair, stick their arm out the window of their best friends car and roll with the motions in a rapture of soundtracked euphoria, and jangled adventure.

Unhinging genre in our instant-access era of musical snoot, no-one does an enthused-chorus quite like Pip Blom yet much can be said for this gang being far from one-trick-ponies.

Anthemic drifters ‘Different Tune’ and ‘It Should Have Been Fun’ are slow building, amplified highlights. Carrying all the weight of convicted fearlessness on their shoulders, Pip Blom unhinge pre-disposed expectations of crafted alternative like graduates straight outta Kim Deal’s school of rock, whilst closing number ‘Trouble In Paradise’, sets the tone for what will only be the ultimate, set-list once gigs resume again.

With Pip Blom, no mood is untouched nor sense of renewal left behind. The trick to it all? As Pip reveals: “I just really like catchy songs and I feel like that’s something we try to do. I’d classify it as being sentimental – it’s not sugar-happy Pop.... more like ‘Titanic’ pop songs...”

For those of us missing the buzzed adrenaline of communal music exploration, the idea of escapism in cramped and sweaty crevices can seem quite lifeless. If it's a sense of community you’re after then look no further than ‘Pip Blom Backstage’.

Streaming goodness 24/7 as a fan-centric loyalty app, ‘Pip Blom Backstage’ gives access to exclusive news, premium content, and, a chat box for the Pip Blom Backstage community; further cementing Pip Blom as undeniable pals for life as fan-clips, spotify playlists and even a cooking lesson from bassist Darek Mercks, are all made available from the VIP lounge of your own back-pocket.

In conclusion, there're actually thirty-five ‘Welcome Break’ pit stops a weary traveller can make in a lifetime spent on the M1, and it’s associates. Whilst the road’s presently a little less travelled, Pip Blom’s ‘Welcome Break’ is adamantly nothing to do with the present state of affairs. In fact, it doesn’t have anything to do with much at all and that’s the way they like it.
‘Welcome Break’ is but two nouns of which when placed together in context, ring confidently with prowess, intent, and a radiant true-spirit - much like Pip Blom herself.

Barry says: Both thoroughly melodic and swimming with that airy haze we've come to expect from this Dutch outfit, but with moments of distorted heft and crashing post-punk groove, the new one from Pip Blom is every bit the essential purchase. Ram-packed with hooks and brilliantly produced, it's definitely their most accomplished work to date.