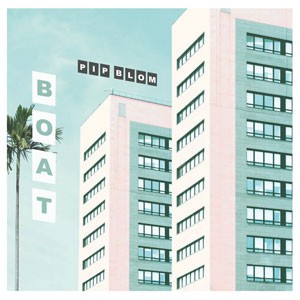 Something special happened to Pip Blom at the tail end of last year. It was a busy twelve months that saw the release of her frenetic EP ‘Paycheck’, two A-Listed singles at 6 Music and support slots to the likes of The Breeders, Franz Ferdinand and Garbage. Capping that off, though, moments before stepping onstage at a sold out Lexington – the London stop-off on her debut UK headline tour – the band put pen to paper and signed to Heavenly Recordings.

Signing to Heavenly was another item crossed off Pip’s to-do list, fulfilment of one of the things she dreamed of since first picking up a guitar and the culmination of a storming 2018 that propelled Pip Blom as one of the year’s most exciting rising guitar bands.

Growing up intensely shy, it was an uncharacteristic plunge into the limelight during her teens that first kicked off Pip Blom’s musical passage: in the form of answering an advertisement for a songwriting competition.

Pip earnestly set about writing songs on a Loog guitar, a three-stringed children’s line of the instrument that aids learning, cultivating a 20-minute set and performing for the first time in front of an audience - eventually reaching the semi-finals of said competition. As you have gathered, the story didn’t end there and failing to win was anything but a deterrent.

Neither was struggling to find band members post-competition. Pip simply ploughed on as she always has, finding a way to make things work with the resources around her. Programming drums on a computer and writing and recording both bass and guitar parts, Pip decided to start self-releasing songs on the internet and it didn’t take long for people to start taking notice.

Today, that same plucky, head-on attitude characterises everything she does and it’s an absolute joy to behold - whether that’s witnessing her band’s powerfully impressive live show or listening to her honest, heart-on-sleeve approach to writing songs on record.

And ‘Boat’ is emblematic of that – an open book of Pip Blom, delivered via her undeniable knack for writing a hook-laden, 3-4 minute song; planting it in your head and making it stay there looping days after first hearing it.

There’s the kinetic combination of guitars from herself and brother Tender Blom, the effortlessly captivating vocal range which can be authoritative and intent like in the driving album opener ‘Daddy Issues’, or soothing and warm as heard in melodic middle track ‘Bedhead’. Then there are the choruses that seem to stop songs in their tracks and lift them into a different stratosphere.

The album’s earworm quality is something that has been connecting across the waters from her home country of the Netherlands, aside from the aforementioned 6 Music playlists, landing an impressive amount of spins across US college radio and a spot on the coveted Triple J playlist in Australia.

Listening through, it’s not hard to understand why. The album is wrapped up in a certain energy that, while evident the band put everything into recording it, would indicate they had a blast doing so – its infectious and, most importantly, wholeheartedly believable.

Dave McCracken bottled up that energy while overseeing the recording at Big Jelly studios in Margate, with the album then mixed by Dillip Harris in a shipping container on the banks of the Thames in East London. Its result is ten songs that, alluding to the album’s title, ferry you through Pip’s headspace via expertly crafted songs gelled together through their unassuming depth.

Laura says: Pip has the knack of writing such immediate, hook filled pop songs that they seem immediately familiar, and not just the odd one, a whole album full! If you're a fan of classic 3 minute indie pop then this is an absolute peach!