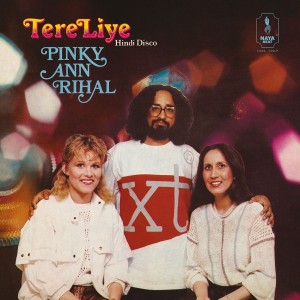 Cult South Asian new wave! Naya Beat is proud to announce its second release, "Tere Liye", the highly sought after and impossible to find new wave album by the unsung pioneers of the British Asian music scene, Pinky Ann Rihal. Remastered for vinyl by multi Grammy-nominated Frank Merritt at The Carvery and available for the first time since its limited 1985 release, the album is as fresh and relevant today as it was 37 years ago.

South Asian new wave. Four words that you will rarely see together. Pinky Ann Rihal were the brainchild of two London-based Punjabi immigrants and progressive rock musicians - Harry Rihal and Jati Sodhi - at a time in the UK when progressive rock musicians were almost exclusively white and Punjabi musicians were almost exclusively making Bhangra. Encouraged by their friend and disco pioneer Biddu (yes, that Biddu!), they cut "Tere Liye" - a one-off Hindi-language new wave album with producer John Hamilton and vocalists Pinky Rihal (married to Harry) and Anne Barrett (married to John). It is an album that exemplifies the cultural collaboration and musical synthesis of the time. Complementing the rich, cosmic and layered synths and drum programming of Hamilton and the distorted guitars of Rihal and Sodhi are the Hindi lyrics of vocalists Pinky and Anne. The result is an amazing one-of-a-kind South Asian New Wave album. Nothing like it has come out before or since.

Stymied on its original release by bungled distribution, poor marketing and plenty of bad luck, this incredible album seemed destined to be lost to history. With Asian electronic music in the UK seeing a rebirth and capturing imaginations around the world,"Tere Liye" can finally take its rightful place as one of the pioneering albums of the Asian underground.

This is Naya Beat’s second release in a series of reissues, reworks and remixes, and compilations dedicated to uncovering electronic and dance music from the overlooked ‘80s and ‘90s South Asian music scene. Their first release "Naya Beat Volume 1: South Asian Dance and Electronic Music 1983-1992" was named by the Vinyl Factory as the Number 1 reissue of 2021.