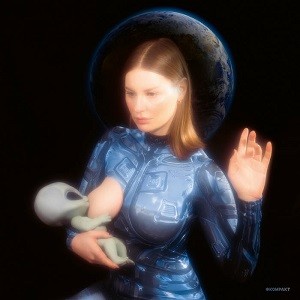 The dance floor as devotional is a trope as old as the club itself. But, with her new album, Jesus Was An Alien, Perel subverts the stakes of our collective communion: Who are our arms raised to? Who are we seeking salvation from?

“Jesus Was An Alien is a discourse about whether Jesus was an actual alien,” she explains, “but also a social debate about what is and implies religion today.” She offers up her provocative second record – her first on Kompakt – as a soundtrack for the listener’s own journey through the intricacies and ironies of modern belief. Picking up on the themes she brought to her debut, the 2018’s LP Hermetica on DFA, Perel has created ten tracks rich with spirit and allusion. Her influences are myriad, from the indie dance hitmakers of the early 2000s – Hot Chip, Simian Mobile Disco, Justice – to rave compilations that predate her ascent to the DJ booth, to more abstract inputs. Living with synesthesia, she says, “I feel emotions and colors piling up inside me, then there’s a triggering sound or event that opens a valve. My tracks are color streams that tell a story.”

Jesus Was An Alien is not just multicolored – it’s multi-lingual too, slipping in and out of tongues in a single track, sometimes dispensing with words altogether (the ecstatic breakdown of “The Principle of Vibration”). The album features Perel’s voice almost entirely but for her special collaboration with Canadian songwriter Marie Davidson on the title track. “Jesus Was An Alien” stirs like a late-night revelation, a heady discovery awakened in the dark. Perel lays out a fiercely disciplined electro pulse, with Davidson’s proclamations growing more fervent over the song’s sensual stride. “I already said everything with my synthesizers and the melodies I created,” Perel explains of the collaboration, but “somehow she gave the song a voice I couldn’t.”

Perel drives further not only spiritually but sonically across the ten tracks, taking thrilling production risks: standouts include her breathy vocals atop a melodic piano strut on “Matrix;” the delirious blur of ghostly chimes and disembodied voices of “Religion;” and the retro radiance of “The Principle of Vibration,” in which Perel exhorts us to “come on and vibe” over an athletic riff and shuffling percussion.

“Kill The System,” meanwhile, hits the listener with tense acid pulses, building to only an imagined release and calls out the end of patriarchy. Album closer “Am Kanal” starts as a pensive cloud of a track, finally breaking into a rich textural rain of synths and stabs. The variety throughout Jesus Was An Alien underlines Perel’s purpose in this latest project; she’s experimenting her way to answers – or maybe just more questions. After all, she says, “questions are the beginning of something new.”

A1 The Tragedy Of CG
A2 Jesus Was An Alien (ft. Marie Davidson)
A3 Real
A4 Hunger
A5 Matrix
B1 Religion
B2 The Principle Of Vibration
B3 Kill The System
B4 Life Aquatic