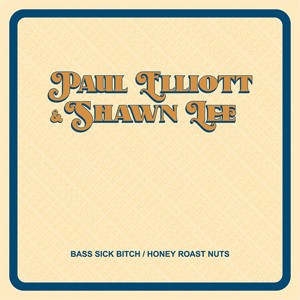 Quirky as fuck! is the term to describe the latest killer 45 from Paul Elliott & Shawn Lee.

Since they crossed paths over a decade ago, Paul (Eleven76/Hot Border Special/The Mighty Mocambos) & Shawn (Ping Pong Orchestra/Young Gun Silver Fox) have collaborated on many impressive projects including the critically acclaimed documentary The Library Music Film. The pair share a love of weird, exotic, otherworldly sounds that can usually only be found in classic library music. However, with their latest release on Farfalla Records, they take the listener on a deep dive into the strange, percussive and unusual world they inhabit!

'Bass Sick Bitch' begins with a glitchy toy rhythm and leads into a voice memo of a wooden 'Jank tone' instrument that Shawn had played and recorded for Paul to hear. Paul's low slung drums and percussion take off and the pair exchange phrases on some of their unusual instruments. This one has a head nod groove and a breakbeat that poppers, lockers and bboys can get down to...

'Honey Roast Nuts' is introduced with a rhythm Paul literally played on an old tin of Honey Roast Nuts, hence the name....Shawn creates the vibe with Polynesian Ukulele, guitar and retro futuristic synthesized sounds, all the while a 70s inspired bass guitar keeps the mood up. The middle of the tune is stopped in its tracks when a voicemail recording from Paul's phone pops up and Shawn's fried brain takes us out with a modulated guitar!

Take a trip with Paul Elliott & Shawn Lee, It's all good in the motherfucking hood yo!