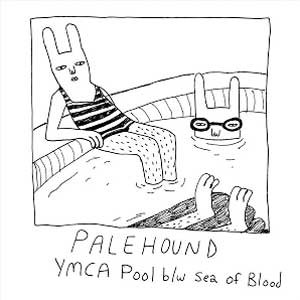 The fourth release in the Saddle Creek Document series, where they aim to highlight artists and music scenes from around the world that they’ve fallen in love with, but aren’t necessarily already part of the Saddle Creek family, is the YMCA Pool 7-inch from Boston’s Palehound.

Led by fierce vocalist and prolific creative force Ellen Kempner, Palehound formed in 2014 and has since taken their plainspoken, techniqueheavy indie rock from the basements of Boston to festivals around the world.

Kempner described the origin of the tracks found on YMCA Pool in saying, "I've had these songs laying around forever and could never really find a place for them on a record. After we toured with Bully, Alicia Bognanno offered to record some stuff for me at her house in Nashville, which seemed like a great opportunity. We spent two days hiding from the heat in her house recording... and also at Dave and Buster's. I love Alicia she is truly the best."