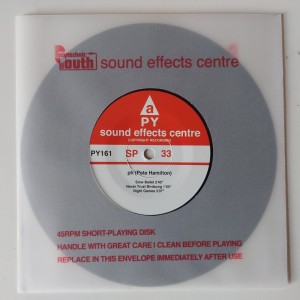 From Dublin, Ireland, in 1982, ph emerged from the demise of the peridots (lower case p) that previously had arisen from the ashes of Modern Heirs, who first played live in 1978 with Pete Hamilton and ex-Radiators (from Space) Steve Rapid, sharing a bill with an early U2. The band line-ups in the small Dublin scene were fluid, as were the band names, becoming the peridots in 1981 with Steve Hamilton and Stan Erraught and during a brief period with drummer Pat Larkin (The Blades). In 1983 Steve would leave to form Stars of Heaven. Subsequently, ph was mostly Pete Hamilton with passing members Pat Larkin and Des O'Byrne.

Sadly, Hamilton gave it all up in 1984, overwhelmed by the underwhelming response from a public who would take many decades and a renewed interest in early 80’s minimal electronic music scene, before finally beginning to appreciate the beauty of his music. Polytechnic Youth hopes to do its bit in either furthering that rediscovery programme or perhaps act as a first time introduction to ph’s music.