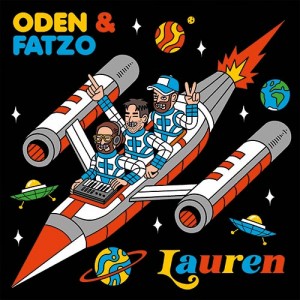 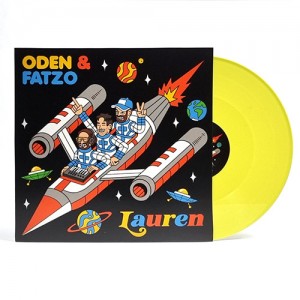 After the promo version flew off the sleeves, now comes the full picture sleeve, yellow vinyl version of French live trio, Oden & Fatzo’s chart topping, house smash hit, ‘Lauren’ limited to 1000 copies. A bootleg experiment that got out of hand, Oden & Fatzo’s Radio 1 A-listed single is the accidental hit that everyone is talking about.

So how do you go about making an ‘accidental hit’, by accident of course... The track came about when French DJ Fatzo tried to demonstrate the difference between an edit and a remix to his dad, “... I took a song from the band Men I Trust, sped it up and added a drum beat and violin. After playing it to Oden, they loved it, and in turn, added their secret ingredients.”

Unlike the name might suggest, Oden & Fatzo consists of three people: The Parisian underground collective are a powerful fusion of the electronic live duo Oden, and house DJ Fatzo. Back in 2020 a bootleg version of ‘Lauren’ was uploaded to the YouTube channel of the electronic label Novaj, kicking off an unforeseeable wave of enthusiasm. That video is now approaching 3 million views. Enthralled listeners begged for a commercial release, a year later Ministry of Sound/B1 cleared the sample and the track started its march across the airwaves and up the charts.

With its captivating beat and nostalgic catchiness, ‘Lauren’ makes up for the party nights lost to the pandemic lockdowns, and sees people dancing in their homes and on the streets, as concerts, parties, and live sets are finally making a return. As the trio put it: “This song was all about hope, freedom and a party atmosphere at a time when you couldn't go anywhere. We think it gave everyone who heard it a little bit of an escape, including us.”

Millie says: Pure gem of disco/house tackle here from Oden & Fatzo, probably one of the most catchiest tracks to grace the player this week, upbeat to match the sunny mood in the shop.