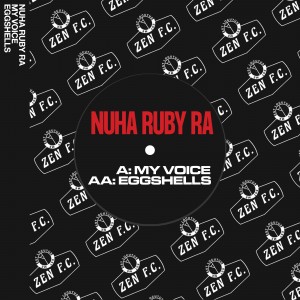 Nuha Ruby Ra releases her double A-side 7” “My Voice / Eggshells” on 11 November 2022 via Zen F.C., the label run by Yard Act members James Smith and Ryan Needham. Having bonded during her special guest slot on Yard Act’s May UK tour, Zen FC couldn’t resist asking Nuha to be the next artist in their series of 7”s, following on from Baba Ali and Benefits, not to mention Yard Act’s own early releases.

Nuha says of the release: “Putting out My Voice on 7” with Eggshells on the flip side is a special little world at night in my head. They’re both purgatory in different ways. it’s a special song for me I wasn’t ready to part with. Until James asked me to be further a part of the Yard Act family and release something on Zen FC!

I was in the middle of more crazy touring after I left them and decided giving them Eggshells right now is like giving your new best friend your new favourite toy, to show them you really love them. I sort of forgot other people will hear it. Also the toy is a bit weird. My love for Yard Act, as artists and humans is deep! They’ve grown to mean so much to me over the big tour we did together. I’ve found a real kindred spirit in all of them. Not least to say It’s a real honour to be alongside the brilliant artists on Zen FC, Baba Ali, Benefits, Acid Klaus, Elton John.. I think they’re all very good.”

Yard Act’s James Smith says of the release: “I first witnessed the immense powers of Nuha Ruby Ra on the 31st July 2021, when we shared a new band bill together in the basement of YES Manchester. Covid restrictions had been lifted a week prior and the general etiquette of how to exist in crowded rooms was still being navigated. I watched Nuha's set from the back with a mask on, but the days of rubbing post-show shoulders in the green room were yet to return and so I became a fan, but not yet a friend.

Her debut mini album came through the post not long after and I listened to it relentlessly. I played it to the band, and we unanimously agreed that if she was up for it we would take her on tour with us. She was up for it. Cosmic. Every member of Yard Act and our touring crew made a friend for life in Nuha when we toured together earlier this year. The least we could do is help a friend and gain cool points by releasing such a banging record on our label. Long live Nuha Ruby Ra, the artist and the human.”