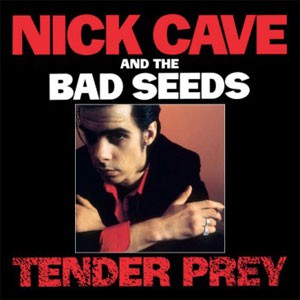 ‘Tender Prey’ is the fifth studio album from Nick Cave And The Bad Seeds and was released on 19th September 1988. The album was produced by Flood and recorded during several sessions over the course of four months in West Berlin - where the band were based at the time - and London.

The album opens with ‘The Mercy Seat’, which has been subsequently played at almost all of the band’s live performances since 1988 and was later covered by one of Cave’s biggest influences, Johnny Cash. ‘The Mercy Seat’ was released as a single in May 1988 as a precursor to the album and ‘Deanna’ was released shortly after the album hit the streets.

Cave later admitted that the album “was made at a difficult time in my life when things were spiralling out of control in a lot of areas.”

This edition, approved personally by Nick Cave, is finally available again on its original format.