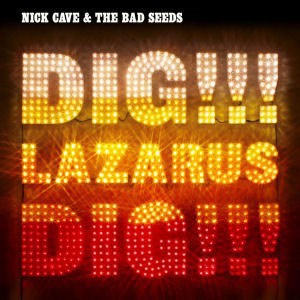 ‘Dig, Lazarus, Dig!!!’ is Nick Cave & The Bad Seeds’ fourteenth studio album, and was recorded in June and July 2007 at The State of the Ark Studios in Richmond, Surrey, and mixed by Nick Launay at British Grove recording studios, in Chiswick, west London, and was released on March 3rd 2008.

It would also be the last album to feature founding member Mick Harvey, who left the Bad Seeds in 2009.

In several interviews Cave has stated that this album would "sound like Grinderman", his side project, who had released their debut album a year earlier. In line with this rough-and-ready approach, the album was recorded in about five days, an uncommonly short period for a full-length album.

Cave wrote on his inspiration for the album: "Ever since I can remember hearing the Lazarus story, when I was a kid, you know, back in church, I was disturbed and worried by it. Traumatised, actually. We are all, of course, in awe of the greatest of Christ's miracles—raising a man from the dead—but I couldn't help but wonder how Lazarus felt about it. As a child it gave me the creeps, to be honest. I've taken Lazarus and stuck him in New York City, in order to give the song, a hip, contemporary feel. I was also thinking about Harry Houdini who spent a lot of his life trying to debunk the spiritualists who were cashing in on the bereaved. He believed there was nothing going on beyond the grave. He was the second greatest escapologist, Harry was, Lazarus, of course, being the greatest. I wanted to create a kind of vehicle, a medium, for Houdini to speak to us if he so desires, you know, from beyond the grave."

Critical response to the album was overwhelmingly positive, with reviewers citing this as both a return to greatness and a new side of the band.

A review from NME described the record as a "gothic psycho-sexual apocalypse" and gave it 8/10, whilst Mojo magazine proclaimed it their album of 2008.

Dig, Lazarus, Dig!!!
Today’s Lesson
Moonland
Night Of The Lotus Eaters
Albert Goes West
We Call Upon The Author
Hold On To Yourself
Lies Down Here (& Be My Girl)
Jesus Of The Moon
Midnight Man
More News From Nowhere