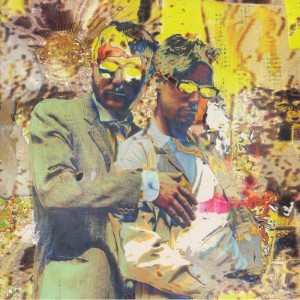 Neuzeitliche Bodenbeläge is the musical vehicle of Niklas Wandt and Joshua Gottmanns. They released a single - Ich verliebe mich nie - in 2018 and an EP entitled Leben in 2019 on the Düsseldorf label Themes For Great Cities. Now the time has come for the Berlin duo’s long-awaited debut album. The 7 tracks comprising Der große Preis distil the inimitable NB sound which blends velvety synth-pop and crystalline digi-dub, basslines like cubes of glass and whiplash snares. The album title certainly lives up to its name: The Grand Prize. This is adventure time, from wild romance to petty crime – it’s all waiting for you right here.
It was early 2019 when, led by their very own energy coach Ali Europa, the band ensconced themselves in an offseason hotel on Lake Constance to record the album, the same procedure that spawned their afore-mentioned
EP. Between a mothballed breakfast buffet and darkened wood furnishings, bright winter sunshine and lonely nights, Wandt and Gottmanns set about conjuring up smoke clouds. The two protagonists have always been drawn to the most contradictory scenes of local nightlife, indeed the project was born in the underground bars of Berlin. On their lakeside sojourn, they paid a quotidianal visit to the neighbourhood watering hole, where a “No Problems” playlist - parts 1 to 5 - blared out of the jukebox and semi-anonymous players lost themselves in a blur of numbers and fruit as the slot machines whirred and flashed at one end of the room. Many a Euro coin was lost here, but a valuable concentrate seeped through the ether which would allow new tracks to grow. A mixture of dark brown artificial leather upholstery and grey FRG decor and synthetics, cosiness and a railway station milieu, aching heads and excitement. The magic ultimately reached completion in the converted studio suite; a pile of analog synthesizers and rhythm machines, a Studer desk, computer, a vocal booth in the shower. Irregular working  ours, and paradoxical daily routines caused considerable friction and, at times, the two musicians worked separately from each other. When contradictions reach breaking point, how rewarding it is for everything falls into place, just like that. Crack open the champagne, pour an Averna and Arabian Mocha.
One eventful year later, the finishing touches were applied in Vienna 1070, or to be more accurate, in Sam Irl’s home studio and the International Major Label Studio just around the corner: Gelb's Groove emerged from smokeladen nothingness in February 2020. The end product was honed with overdubs, refinements and vocals. Finally, the title track, Der große Preis, based on supercharged lyrics that had been floating aound for some time, was completed with Daniel Meuzard piloting his spaceship-like EMS synthesizer. A month later, cultural activities came to an end and Neuzeitliche Bodenbeläge had their debut album in the bag, like one big promise. Sounds evoking fragrances of yesteryear, yet as young as the present day. Tales of long nights and hot mornings, a market square and leather car seats, all as fresh as the day after tomorrow, having outgrown any scene imaginable. Everything pulsating, every one breathing, the expansion of now.

Patrick says: Ja ja ja! Utter gees Niklas Wandt and Joshua Gottmanns are back on an N.B. tip, treating us to a weird, wavey and wonderful LP on the rejuvenated Bureau B! Blending Deutsche boogie and wonky electronics the duo conjure up the stickiest synth funk imaginable on an LP packed with treacle dancers and junk food hallucinations.