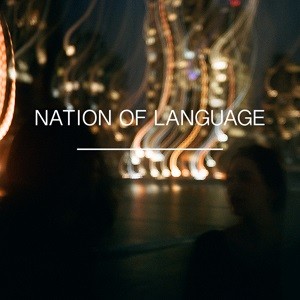 From Brooklyn, Nation Of Language have made a name for themselves creating music from another lifetime. On new single ‘From The Hill’ singer Ian Devaney says, “'From the Hill' is a song reflecting on times when friendships fall apart over romantic entanglement, accompanied by the sensation that you're somehow watching it happen from above with a more zoomed-out perspective. It can feel at times like certain parts of life are a story with which you're just following along - the characters enter, they play their role, and then they leave. Often it'll feel sudden and catch you off guard, and other times you’re able to see that it's the only way things could have played out despite what you may have wanted.”

He adds, “For us, we’re in a moment right now where it feels good to get this out into the world. It’s one that didn't really feel like it fit the vibe of A Way Forward, nor is it any real indication of where the next record is likely heading. When that situation arrives we like to use these 7” releases to step outside the larger framework that the albums provide and just release a track that we love, so this is us doing that once again.”

From The Hill
Ground Control