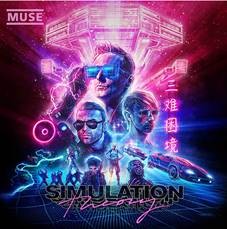 The eighth album from Muse, ‘Simulation Theory’, features eleven tracks and was produced by the band, along with several award-winning producers, including Rich Costey, Mike Elizondo, Shellback and Timbaland.

CD/Vinyl:
Algorithm
The Dark Side
Pressure
Propaganda
Break It To Me
Something Human
Thought Contagion
Get Up And Fight
Blockades
Dig Down
The Void