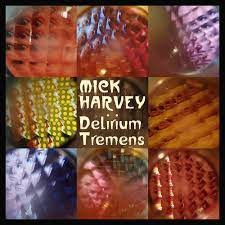 Mick Harvey’s Delirium Tremens, the third volume of his Serge Gainsbourg translation project, repressed on limited edition transparent yellow vinyl. This is released alongside the new pressing of Intoxicated Women and follows Sketches From The Book Of The Dead and Four (Acts of Love) released earlier in 2023.

Originally released on 24th June 2026, Delirium Tremens was Mick Harvey's resumption of his series translating Serge Gainsbourg’s songs into English after a 20 year hiatus. Both volume one (Intoxicated Man) and two (Pink Elephants) are cherished classics and introduced English speakers to one of the most legendary songwriters of the 20th century. The album covers a wide cross-section of Gainsbourg material, from 1976’s ‘The Man With The Cabbage Head’ (L’homme à Tête De Chou) to ‘Deadly Tedium’ (Ce Mortel Ennui) and ‘Coffee Colour’ (Couleur Cafe) from the late 50s and early 60s.