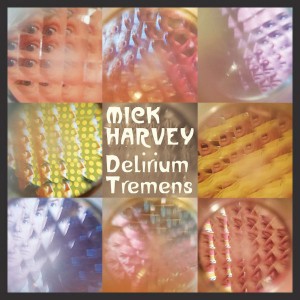 It has taken 20 years for Mick Harvey to resume his project of translating Serge Gainsbourg’s songs into English and this is the long-awaited continuation (Volume 3) of the series - ‘Delirium Tremens’.

The intervening years have, of course, been full of activity and dozens of releases, including four solo albums and several albums as a member of Nick Cave & The Bad Seeds and in collaboration with PJ Harvey.

‘Delirium Tremens’ brings us another wide crosssection of Gainsbourg material. From 1976’s ‘The Man With The Cabbage Head’ (L’homme a tete de chou) all the way back to early songs such as ‘Deadly Tedium’ (Ce Mortel Ennui) and ‘Coffee Colour’ (Couleur Cafe) from the late 1950s and early 1960s, as well as a selection of five songs from the TV special ‘Anna’ which starred Anna Karina with the female parts here executed with enormous charm by Xanthe Waite, who has been joining Harvey on his recent shows.

The album is rounded out by a beautiful rendering of the late period Jane Birkin duet ‘The Decadance’ (La Decadanse) where Harvey is joined on vocals by his wife Katy Beale.