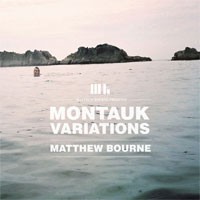 Matthew Bourne is the latest signing to The Leaf Label, and Montauk Variations is his first ever solo studio album.

A phenomenal live performer, Bourne brings a breathtaking physicality to the piano that, once witnessed, is hard to forget (try searching for ‘Matthew Bourne piano’ on YouTube).

A genuinely unique pianist and composer, whose music straddles jazz, classical and rock, Bourne uses every imaginable technique to wring the last drop of inspiration from his chosen instrument.

Montauk Variations represents something of a change of direction for him – an album of beautiful, lyrical solo piano compositions, punctuated by visceral percussive pieces.

The album was recorded in The Great Hall at Dartington College, Devon in May 2011, with additional recordings at St Margaret’s Rectory in Manchester and Rebel Elements studio close to his Yorkshire home.

A restless, endlessly exploratory musician, don’t expect him to stand still - this is the first in a series of albums under the ‘Matthew Bourne presents’ banner, with future releases to include an audio-visual project recorded with his beloved Memorymoog analogue synthesizer, and an album with vocalist Seaming To under the name Billy Moon.