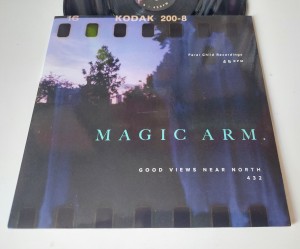 A beautiful comeback record of sorts for Marc Rigelsford’s MAGIC ARM project. The 45 is a taster for his own privately released, and utterly fabulous “Dance Mania” full length, currently available via his bandcamp page.

Recorded in isolation in a former whiskey distillery, “Dance Mania” is “Magic Arm whittling and distilling sound down to pure forms, a collage of songs, mood pieces, drones, found sounds and stirring instrumental passages”. The two tracks here are lifted from the album, with its A side, the majestic “Good Views Near North” having already attained 6music airplay.

The songs’ treated piano opening offers no hint to the beautifully incessant, kinda’ motorik groove that then takes over- wonderfully skewed and quite otherworldly perhaps. The groove then changes tack again as it closes with cellos and strings aiding further it’s general ‘out there’ mood. It’s a beautiful piece and by releasing it on 45, one would hope to push Marc’s music out a wee bit further, certainly it’s a thrill for Feral Child to release it and it’s flip, the more electronic, and equally fabulous “432” is just great too.

PaperlungDo What Thou Will / Where Were You Then?