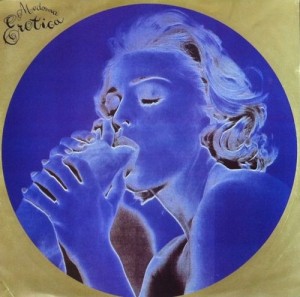 Madonna’s ground-breaking fifth studio album, Erotica, will celebrate its 30th anniversary on 20th October 2022. In 1992, the album debuted at the top of charts around the world and has gone on to sell more than six million copies. To celebrate the anniversary, a limited edition 12” vinyl picture disc featuring the album’s title track will finally see the light of day after a three-decade delay.

Originally scheduled for release during the fall of 1992, the picture disc features a colorized version of the famous “toe sucking” photo taken from Madonna’s Sex book, which was released the same week as the Erotica album. However, the picture disc was cancelled unexpectedly just ahead of release, as the visual was considered too explicit for in-store display back then. The manufactured copies were promptly destroyed, with only a few finding their way into the public’s hands, only adding to the infamous allure of the release. Now, after a 30-year wait, the “Erotica” picture disc is available now for pre-orders and is set for release on 21 October.