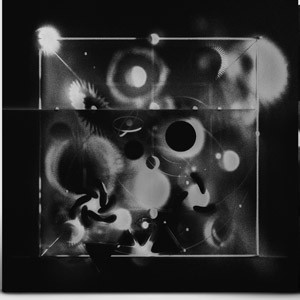 'Night Of The Endless Beyond', the sophomore album by Lord Of The Isles AKA Neil McDonald for the ESP Institute, had almost become a mythical piece of work. The tracks very slowly crept into formation from the lowest depths of 2021, and once the completed album finally made the leap from creation into manufacturing, an entirely new onslaught of follies and delays awaited at the pressing plant. We began to laugh, for not only did Mario Hugo’s otherworldly sleeve artwork visually translate this music so well, but it was an uncanny premonition to the album being lost in space, falling through a black hole, evaporating into the aether like a dream that never really happened. But, at long last, ground control has confirmed contact! It did happen, it will arrive, and it’s not a myth.

Listening to 'Night Of The Endless Beyond' now feels like the return of a strayed friend, one whose distance left us pining for an embrace. Although this techno relies on unassuming means, there is a remarkably complex and persuasive emotional statement embedded here, insisting we learn to endure the long game and allow ourselves patience to investigate and appreciate the minutiae contained not only within the notes, but their negative space. From its introduction, through its mellow crests and valleys, there is a conveyance of restraint - subtle dynamics that quietly beg for attention, repetition so hypnotic that imaginary melodies are inescapable, transient peaks so deliberately scaled that we mourn the subsequent decay. In accordance with Neil’s ESP debut, 'In Waves', we never feel attacked by instrumentation but shielded from sharp edges, able to step inside the music, breathe the air it occupies and know its true intentions, whether bright or bleak.

Just prior to the album close, a film dialogue excerpt summarizes everything quite honestly by proposing, “The truth of the universe is waiting … the truth of what is … it’s all going to go away … everything … into blackness … the void … and nobody is in charge.”

We stare long into the 'Night Of The Endless Beyond' and answer… “You smile.”

Matt says: Really nice, deep and varied LP from our Scottish synth maestro. Veering between isolated ambience, dreamer's techno and wholesome analogue tapestries - it conjures up images of the producer's surroundings whilst hovering between reflective inner gazing and revelling in the beauty of nature and landscapes.