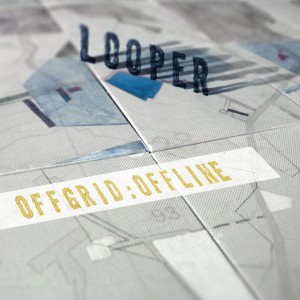 Offgrid:Offline was released as a download only within the band’s 5CD box set, These Things. The vinyl is a limited edition of 500 and includes a download with 3 previously unreleased tracks, Our Own Way Home, (the original song that became the intro and outro on the album, and the melodic theme that occurs throughout), Lucky Tui and The Back Roads.

Looper emerged from Belle & Sebastian in 1997, when Stuart David (co-founder and bass player of B&S) and his wife Karn (an artist who directed the early B&S videos) collaborated for a show at Glasgow School of Art. A degree show fundraiser for Stuart’s sister Karla Black – who received a Turner Prize nomination in 2011- the performance was a multi-media affair incorporating TVs, super 8 film, 35mm slides and kinetic sculptures. Since nothing broke down and everyone clapped, they decided to keep doing it.

The band went on release four albums via Sub Pop, Jeepster & Mute, with many of their tracks appearing in film, including Mondo 77 which appeared in Cameron Crowe's Vanilla Sky (watch the recent video for that track here: https://youtu.be/Xh93L8qDcxI)

After a break from music for a few years, Karn went back to art school to study animation and Stuart turned his focus to studying literature and writing novels, a move to the remote countryside, post-study, prompted the creation of a new body of work.

Offgrid:Offline, the band’s fifth studio album, was the result - these new songs and stories, inspired by the return to peace and quiet and influenced by indie-folk music saw Looper conscious of the very different styles of previous albums. They set out to bring together elements of each into this new work. Structured like the first album, around a recurring melody, Offgrid:Offline is thematically centred on the spoken word piece which gives the album its title, drawing together the musical motifs and lyrical themes from throughout.