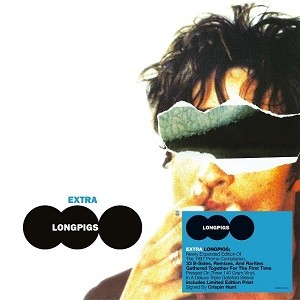 Longpigs were an alternative rock band who came to prominence in the 1990s Britpop scene. Fronted by Crispin Hunt, the group also featured guitarist Richard Hawley, Simon Stafford on bass, and drummer Dee Boyle. Their first album ‘The Sun Is Often Out’ was released on U2’s Mother label in 1996 and featured four UK Top 20 singles including ‘On And On’ and ‘She Said’. Their second and final album ‘Mobile Home’ came arrived in 1999 and featured the UK Top 40 singles ‘Blue Skies’ and ‘The Frank Sonata’.

Alongside their two studio albums, Longpigs recorded a substantial amounts of B-sides and extra material. These tracks are now gathered together for the first time. Demon Records is proud to present the first vinyl release of Longpigs’ 1997 promo compilation ‘Extra Longpigs’. Newly expanded, the set contains 33 tracks including B-sides, remixes, live recordings, and other rarities from across the band’s career