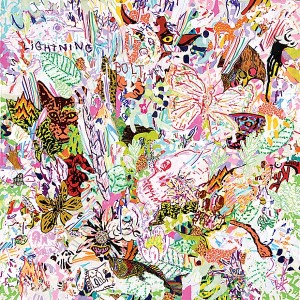 Lightning Bolt’s ‘Earthly Delights’ receives a much desired reissue and is now available for the first time since 2009 as a double LP.

‘Earthly Delights’ is the metal album to Lightning Bolt’s genrestraddling discography, using the signature speed and volume reminiscent of past releases while centring around growling chords and monolithic rhythms commonly found in the foundations of metal.

Throughout their career, Lightning Bolt have toured the world, performing at numerous festivals, including Coachella, ATP, Pitchfork Music Festival, Austin Psych Fest and FYF Fest, to name a few.

In 2017, Brian Gibson developed the video game, ‘Thumper’, with his own company, Drool, which would go on to be awarded Apple’s Design Award in 2019, and be included in IDN’s Best of 2016.

“... beneath all the noise and fury, there are bona fide songs here, driven by giddy singalong melodies that settle into maddeningly tight runs and rhythmic loops then spin off into chasms of freeform noise...everything is focused on the extraordinary physicality of their sound: spasmodic, psychedelic, heavy, loud and lifeaffirming.” - The Guardian

“The whole point of their music is hypnotic repetition, magical moments sprouting from endless reiterations. They could stretch out further, but they’d likely lose access to those mini-epiphanies... Lightning Bolt are happy to grind out an eternal present, and few can dig deep into a moment quite like them.” - Pitchfork