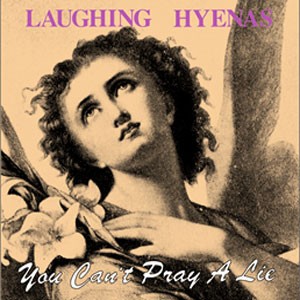 Formed in the mid 80s wreckage of American punk and hardcore, Laughing Hyenas were comprised of staples of the Detroit punk scene, including John Brannon (Negative Approach) and Larissa Strickland (L Seven) along with the locked-in rhythm section of Kevin Strickland and Jim Kimball. Groundbreaking, game-changing and some of the scariest records to come out of Detroit...or anywhere.

Taking the name from a Mark Twain line, the Laughing Hyenas went back into Smart Studios with Butch Vig to record their debut full-length You Can’t Pray A Lie. The Hyenas further elaborated on the template that Merry Go Round set. Kevin, Jim and Larissa lay down deceptively simple hillbilly voodoo blues that at the same time is so rhythmically complex you’re never quite sure what’s going on. Brannon’s vocals are as frenzied and intense as ever. With the balance and everything just right on YCPAL, our dear Hyenas recorded and released one of the milestone/cornerstone albums of the 1980s American underground music scene.