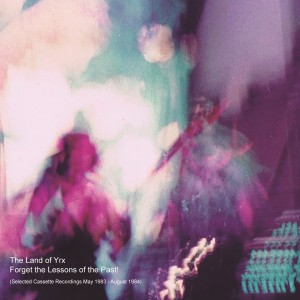 New on Polytechnic Youth, a wonderful - and long overdue - vinyl compilation of key UK electronic pioneers LAND OF YRX’s work between 1982 and 1984.

Released almost exclusively across a series of DIY produced cassette only releases, the bands’ output is now revered in that golden period of groundbreaking, home recorded 4 track experimental / minimal electronics releases, all of which are highly sought after and hugely influential on the swell of electronic musicians that followed at that point in the UK.

The duo consists of Shrewsbury based Rob Andrews and Dave Gate (extended for live shows) and with their core discography being so utterly wonderful, honing in on a fair representation of their work with 20 minute-a-side time caps here, was no mean feat. So much of their greatest work featured across epic 15 minute plus jams- ideal for the cassette format, but trickier for wax. But we’ve got there; 7 beauties which highlight the bands’ love for experimental electronica, kosmische / krautrock and prog perfectly- all underpinned with Rob’s superb often Gottsching-esque guitar work.

A superb band, totally worthy of further investigation- massively recommended to anyone into any of the above, or that core of early UK electronic underground / cassette scene of Colin Potter, Paul Nagle, Neural Circus as well as overseas heavyweights like Conrad Schnitzler etc…

The duo are still very much busy and working today, as Dave says “Why stop just because you’re having fun?”