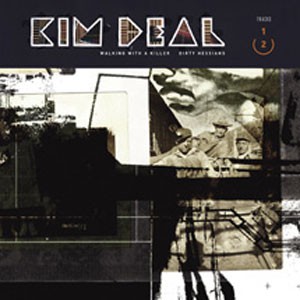 "Walking With A Killer"
Recorded with Lindsay Glover on drums, Jeff Cairns on the creepy moaning guitar panned left, Dan Elkan on the lead guitar panned right. I played the other stuff…bass guitar, rhythm guitar, crazy lead section. Carrie Bradley who played on Pod and Last Splash is playing violin. We recorded this in Los Angeles at 5 Star Studio with Bryce Gonzales. Then I took the 2" tape to Steve Albini and he mixed it for me at his place in Chicago at Electrical Audio. I went up to Sterling Sound in NYC and mastered it with Ryan Smith. The lacquer was cut using analog playback to vinyl master. So this track stayed in the dimension of time, baby. And that's why I put that little guitar thing-y with the words Recorded All Wave. I am a geek.

"Dirty Hessians"
I recorded everything on this at Type Foundry in Portland. Recorded in the analogue domain. This was also mixed by Steve in Chicago with me and then mastered from analog tape using Direct Metal Mastering. The artwork was done by Chris Biggs and features a photograph of Kim's grandaddy on a mantrip working a mine near Bluefield, West, by God, Virginia, 1945.