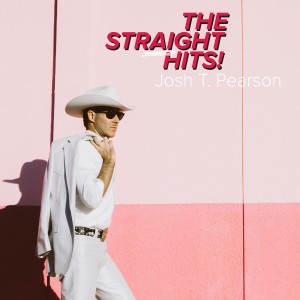 Josh T. Pearson presents ‘The Straight Hits!’, an album which began as a mere creative exercise - each song had to follow certain parameters, described as The Five Pillars - and one that has given Pearson the freedom to write a lighter, more ‘straight’ album.

In three days, Pearson had penned nine whole songs (the album also includes a cover of Austin Americana singer/songwriter Jonathan Terrell’s wonderful country tribute song ‘Damn Straight’). The album is a departure from years of long form songwriting with tunes meant to hit straight and to the point.

‘The Straight Hits!’ features multiple different flavours of country, rock and all points in between, taking in blasts of goofy shit-kicking country-punk (opener ‘Straight To The Top!’,); cataclysmic rock & roll playing its romantic drama at high-stakes (‘Loved Straight To Hell); aching folksy mourn (‘Dire Straights Of Love’) and even a bona fide love song, ‘A Love Song (Set Me Straight)’, which Pearson admits breaks several of the Five Pillars but obeys an unwritten Sixth Pillar: Musical rules are made to be broken. There’s new Josh T. Pearson music in the world and it’s joyful, giddy, lifeaffirming stuff.

Barry says: Never one to shy away from his Texan roots, former frontman of Lift To Experience branches out into acoustic numbers and pulsing balladry, amongst the (not surprising) walls of catatonic, blissful noise.