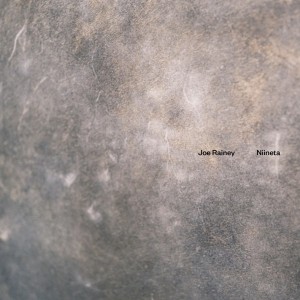 Joe Rainey is a Pow Wow singer. On his debut album, ‘Niineta’, he demonstrates his command of the Pow Wow style, descending from Indigenous singing that’s been heard across the waters of what is now called Minnesota for centuries. Depending on the song, his voice can celebrate or console, welcome or intimidate, wake you up or lull your babies to sleep. Each note conveys a clear message, no matter the inflection: We’re still here. We were here before you were, and we never left.

Rainey grew up a Red Lake Ojibwe in Minneapolis, a city with one of the largest, proudest Native populations in the country. He was raised on the South side near Franklin Avenue, the post-Reorganization Act urban nexus of local Native American life. Rainey came of age in the heart of this community (also the birthplace of AIM), but always felt like he was living in a liminal space with the Reservation five hours North. At an early age Rainey started recording groups, and practiced dancing and singing. As a teenager he started his first drum group, and soon his voice grew strong enough to sing in Midnite Express, a new drum group featuring members of the legendary group The Boyz. They were professionals, city Indians travelling all over, repping their reservations and their neighbourhoods - competing for cash and cred, always striving to capture that ‘Pow Wow feeling’ of togetherness. Rainey was just as much of a fan as he was a participant, recording others then studying the tapes, cataloguing the different styles.

On ‘Niineta’, Rainey finds himself in between cultures again, collaborating with producer Andrew Broder, who brought his turntablist sensibility to the project. The two of them met backstage at Justin Vernon’s hometown Eaux Claires music festival before crossing paths more through the 37d03d collective, and both contributed to the last Bon Iver album before partnering up. “At first I didn’t know what I could add,” Broder says. “I came to understand everything is rooted in the drum - even the songs on our record that have no drum.” Each song started with Broder’s beats, the two of them experimenting with various sounds and tempos before orchestrating and recontextualizing the ancient sounds in strange, new in-between places, also pulling from Rainey’s vast sample folder of Pow Wow recordings, layering in slices of his life.

‘Niineta’ is a short version of the Ojibwe term meaning ‘just me’, and Rainey is using the term only in the sense that he’s taking sole responsibility for the music. He is protective of Pow Wow culture - once outlawed by the US government and maintained in secret - while trying to figure out where he fits and how he can be creative with it. “These are my creations, but they’re Pow Wow songs, and our language is sacred,” he says. Rainey suggests conceptualizing the album as him working the door at a Pow Wow after party. “If I’m answering that door, I want to say, hey, yeah, come on in. But there’s fucking tons of us in here. It ain’t just me.”