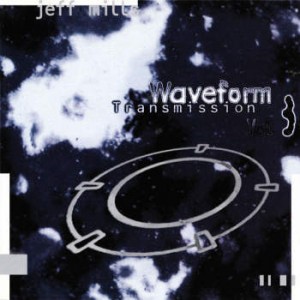 Pivotal, iconic, groundbreaking & pioneering, the third part of Jeff Mills and Rob Hood's "Waveform Tranmission" series is given a limited re-run. When this originally came out in 1994 on Tresor it sounded fierce, uncompromising and unique - and perfectly encapsulated the spirit and energy across the German capital following the collapse of the Berlin Wall. As such Jeff and Rob became heros and flagbearers for the techno sound in Europe, miles away from their home in Detroit (who would take much, much longer to embrace the sound outside the select group of DJs, producers and dancers which were involved in the scene).

The unrelenting tempos, machine-code drums and alien frequencies would soundtrack many a 48-hour weekend as the punk spirited, electronically-guided party spirit came into blossom throughout the 90s.

An absolute masterpiece which every home should posses. Limited to 1500 hand numbered copies - this is one techno album you can't be without!

Matt says: They don't make 'em like this anymore... Boundry dissolving militancy from the Wizard. One of his most uncompromising and arresting releases in his catalogue.

Jeff MillsMoon - The Area Of Influence