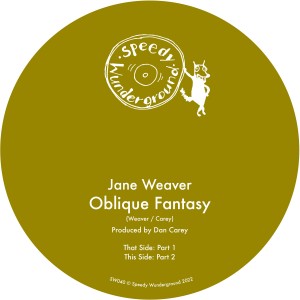 The landmark 40th release in Speedy Wunderground’s singles series is from Manchester (via Widnes)’s titan of the independent UK scene and unshakable figure in experimental pop music Jane Weaver. Having traversed numerous genres across her long and self-propelled career from krautrock to girl-group psyche, indie to folk, grunge to psychedelia – and having worked with an illustrious list of legendary friends and collaborators over the years including Factory Records’ Rob Gretton, Twisted Nerve’s Andy Votel as well as counting Doves and Elbow as early backing bands – this is her first new material since the triumphantly twisted pop of her critically acclaimed Flock album last year.

It's also a first for the label too – with this being the only track in the label’s single series to not be recorded in Carey’s regular Speedy HQ under his family home in Streatham – with this one having been put to tape in the legendary surroundings of Abbey Road Studios.

Carey has been a regular there for a while – having manned the desk numerous times during his career – as well as Christian Wright – one of the in-house mastering engineers there being a close friend of the label and producer. But during COVID the hallowed premises started a series of Lock-In Sessions – a series of events designed to illuminate the musical creative experience – filming and offering a window into what is normally quite a closed process.

‘I was invited to Abbey Road to record as one of their Lock-In Sessions’ recalls Weaver, ‘so asked Dan to be involved. I’ve always admired Dan’s production style - it’s really exciting and dynamic, most records I like these days have his name on them, and for ages I’ve been keen to have a look around his studio and explore the possibilities to do something creative together. We wrote the song at Dan’s place and then recorded most of it at Abbey Road- Studio 3. Having to turn it around, write and record a song from scratch within 24hrs was really exciting as we’d never worked together before, but I knew we shared a joy for certain sounds and equipment- and in true Speedy style it happened pretty quickly.’

As soon as the producer/label heard the resulting track ‘Oblique Fantasy’ it was clear it had to be a ‘Speedy’. Slinky, pulsating bass, ethereal cosmic vocals, jagged minimalist guitar stabs over a menacing krautrock drumbeat – like Roxy Music meets Jane Birkin– it already feels like a classic in the label’s stable and apt that it was written and recorded in exactly the same way –but at the place where some of the most important records of all time were committed to wax.

‘I guess the song is about waiting for passion and inspiration’ says Weaver, ‘writing in lockdown at times wasn’t easy because of the lack of connection, and interaction with others, wanting to write something emotive and pop and looking for a way out of the forced solitude, it was a bit of a puzzle... I guess in the end I’m writing about the longing for normality and that seeming like it was now part of another dimension… a fantasy.’