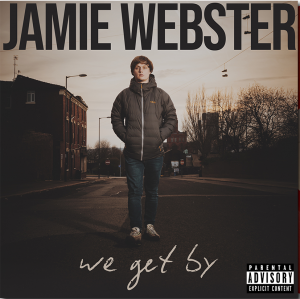 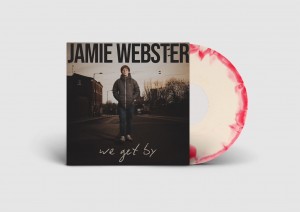 Following a hugely successful year for Liverpool singer-songwriter Jamie Webster, his UK #6 charting debut album We Get By has been repressed on limited edition red and white swirl vinyl with the added bonus track of “This Place” re-recorded with the Sense of Sound choir.

By singing the lives of the angels, villains and overlooked of Liverpool, Jamie Webster sings the hope-filled daydreams of a generation on We Get By, the singer-songwriter’s debut album. Continuing the story from the rock-and-roll records that spilled from the docks into the arms of waiting beat groups, the hopeful indie-pop of the 80s that faced-down Thatcher’s cruelty and the Merseypsych boom of the ‘shroomy 2000’s, Webster sings his city to tell a story of our times.

Webster originally grew in renown for providing new soundtracks to Liverpool Football Club’s rising fortunes, playing to 60,000 fans attending the 2019 Champions League Final in Madrid and performing around the world, as far afield as Australia and Dubai. He has since seen support from BBC Radio 1, Radio X, 5Live, The Guardian (“the Liverpool hero who topped the first folk chart”) to name but a few, and sold out Liverpool’s huge M&S Bank Arena for a hometown headline show to remember at the end of the year, shortly before the new vinyl is released.