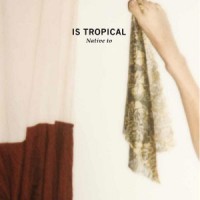 Formed in London, the Is Tropical line up of Gary Barber (vocals / guitar / keys), Simon Milner (vocals / guitars / Keys) and Dominic Apa (drums & programming) first came to international attention with the release of their debut single ‘When O’ When’ on Hit Club Records in January 2010. Produced by Al Al Al (The Big Pink / Klaxons), the single, together with their spectral live shows, saw the band attract the attention of fans and critics alike. After signing to Kitsune and releasing the single ‘South Pacific’, they now deliver their debut album.

‘Native To’, produced by the band with Jimmy Robertson and mixed by Lifelike, features twelve new tracks including the recent single ‘South Pacific’ and the forthcoming new release ‘The Greeks’. Effortlessly swooping from raw pop anthems to lo-fi dance songs with fantastic results, as well as the two singles other standouts include ‘Take My Chances’, ‘Lies’ and ‘Think We’re Alone’.