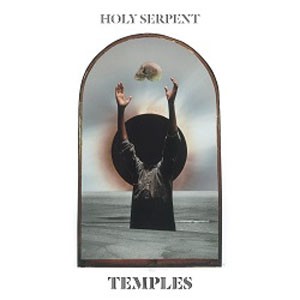 The concept of “skate-rock” has been around for many years, but it has never been embodied as well as on Temples, the new album by Holy Serpent. While the band members are just casual skateboarders themselves, one might be tempted to think that skating has subtly influenced the band's sound. Not only in the elements of 70s hard rock crossed with punk values and energy. But, the music itself is like riding a skateboard: slow grooving passages can shift on a dime into fast thrill-ride riffs. There’s an exhilarating freedom of movement and unpredictability to the sound.

In the short time since their self-titled RidingEasy debut in mid-2015, Melbourne, Australia’s Holy Serpent have gained a lot of attention for their rather punk version of heavy psych and metal. Fittingly, there’s a strong vibe of early Soundgarden, Saint Vitus and Kyuss to Temples in that it’s undeniably heavy, but also clever in its experimentation with subtle tempo shifts, multiple vocal effects and other production techniques. But it’s still more Sabotage than Sabbath Bloody Sabbath.

“We've found playing slow all the time got a tad boring so we've mixed it up a bit with tempo changes and added more parts to each song to make them sort of flow like a story,” Penberthy says. “The challenge was making sure it still flowed as it should. ‘All killer no filler' was a bit of a motto this time around when writing the songs.”

Album opener “Purification by Fire” emerges slowly from a primordial swamp of a reversed gong crash, synth swells, guitar feedback and lightly plucked bass notes before it all coalesces into a driving but slow-burn riff that spans the length of the fretboard as the drum patterns also subtly shift and slide underneath. It’s a brilliant effect, albeit one you might miss if you’re not paying attention. “Bury Me Standing” launches full throttle with a raging guitar solo over a driving riff/rhythm before a quick about-face into a march as Penberthy’s effect-soaked vocals wail above the proceedings. The song builds slowly upon its elements until Penberthy howls an impassioned plea, “bury me standing, I will not forgive you.” Album centerpiece “Toward the Sands” further pushes the tempo changes and sonic experimentation to great effect as the song effortlessly turns on a dime from fast rager to doom, while all sounding cohesive and melodically infectious. Album closer “Sativan Harvest” is an epic nearly 12-minute multi-part journey, built around a central blues motif that drifts into a massive haze of droning guitars set to fat rhythm pickup tone as it swells then recedes, only to restructure into a mutated version of the original motif that eventually abruptly ends with violin, cello and synths in a slow fade into the ether.