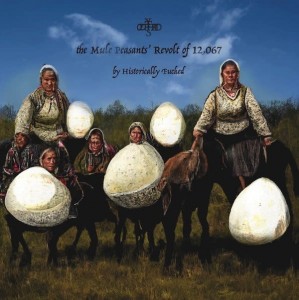 Historically Fucked is a four way entanglement made to create short, eruptive songs and then set about obliterating them from the inside, like improvising a barrel to encase themselves in and then proceeding to lick their way out of it. It is about playing and laughing at playing, and it is about not doing either of those things sometimes. Sometimes it is to do with talking, howling or grunting, and sometimes it is to do with hitting and rubbing.

Historically Fucked contains four people, who each share the same duties, and whose names in sequence are Otto Willberg, David Birchall, Greta Buitkuté and Alecs Pierce. They are from Manchester and often other places. Guitar, bass, drums and voices keenly jostle amid the group’s frenzy of spontaneous rock throttles. Some of these rampant exercises in avant are collected on ‘The Mule Peasants’ Revolt of 12,067’, the band’s new album, released by Upset The Rhythm on February 3rd. This is the group’s first release since 2018’s mantlepiece staple ‘Aliven Wool’ (Heavy Petting). This is Rock and/or Roll as fertilizer, uncivilised and free, as if one were to imagine what the Plastic Ono Band would’ve hit upon if they had read ‘Riddley Walker’, the sound of an entire timeline of expression put back together back-to-front, misshapen and irradiated.

‘The Mule Peasants’ Revolt of 12,067’ is not mere Sedentary Rock but Blasted Basalt, Frog worshipping cave-funk, harmolodic hullabaloo-wop, a musical game of “badger in the bag”. It is the sound of sacks crammed full of aggregate, a chimerical mind-meld, a seductive din that is to a hound dog in blue suede shoes what a raking of the dorsal fin with a fat marrow pinecone is to a pelican in the midst of being fired from the academy.

‘The Mule Peasants’ Revolt of 12,067’ by Historically Fucked was recorded by Rory Salter, mixed by Otto Willberg and mastered by Mikey Young. The liminally worrisome artwork was painted by John Cobweaver.

“They say these days that History is Fucked. Nothing ever dies but continues to rule the earth as an undead tyrant that cannot accept its own decomposition, look earwardly upon the dance of the proudly dead and decrepit!”