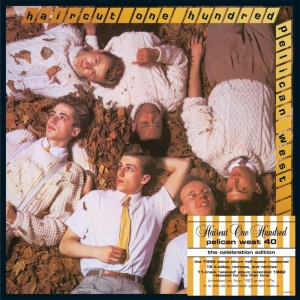 Demon Records are delighted to announce the release of the new half-speed master edition of Pelican West, a celebration edition of Haircut 100’s much-loved debut album, released with full cooperation of the band.

In less than six months, the group moved from being London underground darlings to chart sensations, and within a year had disappeared into pop’s ether, leaving behind one memorable album and four Top 10 UK singles.

“Lots of people are discovering Haircut 100 now and that album and saying it’s fresh as a fantastic daisy, every time, that’s the wonder of it.” – Nick Heyward (vocals and guitar), 2022 . “In our pre-senile dementia years, we can sit here and still feel proud of something we did when we were nippers.” – Marc Fox (percussion), 2022

“This is what bands should be, nobody made any sense!” – Blair Cunningham (drums), 2022. This new edition has been newly mastered by Phil Kinrade, and expertly cut using transfers of the original ½” digital audio tapes using precision half-speed mastering by Barry Grint at AIR Mastering. The equipment at AIR Mastering uses balanced mains power for improved performance and lower noise and the digital equipment is locked to an extremely accurate digital clock to reduce jitter. The Neumann VMS80 lathes and cutting amplifiers used have been fully renovated and modified to enable half speed mastering.

A1. Favourite Shirts (Boy Meets Girl)
A2. Love Plus One
A3. Lemon Firebrigade
A4. Marine Boy
A5. Milk Film
A6. Kingsize (You’re My Little Steam Whistle)
B1. Fantastic Day
B2. Baked Beans
B3. Snow Girl
B4. Love’s Got Me In Triangles
B5. Surprise Me Again
B6. Calling Captain Autumn