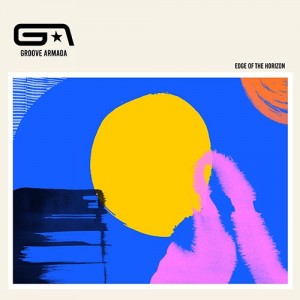 It’s been ten years since Groove Armada released their landmark album ‘Black Light’. They’ve been active in recent years - DJ sets, select live shows and the ‘Twenty One Years’ compilation - yet the prospect of a new album seemed unlikely. That all changed when they stepped out at the Boomtown Festival and saw the reaction from long-term fans and newcomers alike.

Initially they planned to complete some half-finished ideas that remained from the ‘Black Light’ era. Elements of the title track and ‘Holding Strong’ both remain from that original plan, but ultimately their creative connection resulted in their upcoming seventh album.

As always with GA it’s a melting pot of styles, but in contrast to the guitar laden sound of their last album, the Grammy nominated “Black Light”, the uniting stylistic thread here lies somewhere between Hall & Oates , Prince and Roxy Music.

‘Edge of The Horizon’ features a whole range of vocal talent, from friends and neighbours to the godfather of UK Garage Todd Edwards who appears on ‘Lover 4 Now’, out today. A summer anthem of positivity, love and togetherness, Todd’s signature vocals shimmer above a straight-ahead Italo-disco groove.  It was made with a moment in mind. “Ibiza. Poolside at Pikes, that time of the evening when day becomes night, and anything seems possible”.

Groove Armada’s flair for blending electro elements with the energy of a live band remains at the heart of the record. In fact, the foundations of this album are the memories of the 15 years they spent on the road playing dance music live. The legendary GA tour bus parties had a strong dose of yacht rock on the playlist. ‘Holding Strong’ is an unashamed salute to the best of those searing emotional highs of the 80s. NYCs She Keeps Bees heads up the title track, born out of a groove left on the cutting room floor during the chaotic Black Light sessions.

Chicago house music icon Paris Brightledge deploys his iconic tones on two tracks, and Empire of The Sun and Pnau’s Nick Littlemore features on the lockdown anthem, ‘Get Out on the Dancefloor’.

Matt says: Downbeat darlings Groove Armada serve up a late career treat for long standing fans of this iconic act. Featuring some excellent collaborations it finds the pair in a spell of relaxed creativity, eclectic as ever but with a warming, heart-felt message. Full marks!