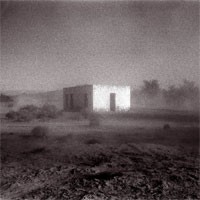 Hard to believe a full decade has passed since the release of Yanqui U.X.O., the last album by GYBE. Never a band to care for conventional industry wisdom, Yanqui was released shortly before Xmas 2003 with little publicity and no press availability, no marketing plans or cross-promotions or brand synergies, with back cover artwork tracing the inextricable links between major music labels and the military-industrial complex. Driven by word-of-mouth from a passionate and committed fanbase galvanized by the group's sonic vision and its dedication to unmediated, unsullied musical communication, the album found its rightful audience.

To suggest that such simple principles and goals have become harder to maintain and enact a decade later is an understatement. For all the contents and discontents – for all the "content" – of our present cultural moment, the idea of circumventing the glare of exposure, the massaging of media cycles and the calculus of identity management appears quaint, if not futile.

But Godspeed is looking to try all the same. The band wants people to care about this new album, without telling people they should or talking about themselves. They want to hold on to some part of that energy that comes with the thrill of anonymous discovery and unmediated transmission, knowing full well that these days, anti-strategy risks being tagged as a strategy, non-marketing framed as its opposite, and deeply held principles they consider fundamental to health as likely to be interpreted as just another form of stealth.

The band has been carving its own path again since 2010, regrouping as the same self-managed collective entity it has been from the outset, making appearances at a tiny clutch of music festivals, and otherwise just touring its own shows. It's been a disorienting time to resurface, but it has felt overwhelmingly right, honest and good. We think Godspeed has made a new record that maintains if not exceeds the standards of their previous work – a high bar, many would agree.

GYBE picked up right where they left off, and after almost two years of practicing, playing and touring, ‘Allelujah! Don't Bend! Ascend! Delivers two mighty sides of music (bookended by two new drones) that the band had been working up prior to their 2003 hiatus, which they have now shaped into something definitively stunning, immersive and utterly true to their legacy. The future looks dark indeed, but on the evidence of this new recording, Godspeed appears wholly committed to staring it down, channeling it, and fighting for some rays of sound (and flickers of light) that feel righteous, unflinching, hopeful and pure.

Darryl says: A full decade on from their previous release, Montreal’s instrumental alchemists GY!BE bring us their astonishing new masterpiece "’Allelujah! Don’t Bend! Ascend!" Having taken a hiatus in 2003 the band reformed as a touring entity in 2010 honing their craft again before unexpectedly offering us this new apocalyptic vision. "’Allelujah!" brings us two 20 minute sprawling epics in the form of "Mladic" and "We Drift Like Worried Fire" and two shorter drone pieces. "Mladic" begins proceedings with an Eastern hypnotic vibe which gradually transforms into a raging torrent of intense and menacing guitar noisecapes dipping and soaring to a thrilling crescendo. "We Drift Like Worried Fire" builds from a simple repetitive three note sequence into a monumental storm of euphoric guitars, strings and pounding rhythm section before falling back and rising again to a brutal and majestic peak of cinematic noise euphoria, it’s like Morricone gone punk. These tracks are bookended by two shorter drone pieces that menace with dynamic intensity, the calm after the storm! ‘Allelujah indeed!