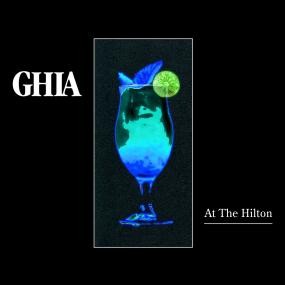 A Limited 7" with two unreleased recordings from 1985: "At The Hilton". This is just the beginning of a series of more unissued songs by the band. Two albums are currently in the works - and there will be more material to follow.

For now, here is what label founder Günter Stöppel aka John Raincoatman says about the project:
'For the past three years I’ve been asking Ghia every once in a while about further recordings. Lutz Boberg and Frank Simon, the two original band members who later joined with Lisa Ohm as a singer, always were communicative, friendly and interested in releasing more music. But at the same time nothing really happened. Accept for a bunch of newer demo tracks they offered on their Bandcamp page for a while, I never was able to hear anything more. I was mainly asking for master tapes to have better quality of the songs from Bandcamp and they just said, they didn’t have anything and everybody else they knew also didn’t have anything. Anyway, a few month ago, I surprisingly received a picture by email. A photo showing a box of 11 demo tapes by Ghia with basically all tracks they ever recorded. I couldn’t believe my eyes! I asked: “are all these tapes full length?” “Yes”, they said, “this is our complete archive”. After a few complications the package with the cassettes finally arrived in Berlin. I didn’t really know what to expect. Everything was taped chronologically, the first cassette included early recordings from 1984 and 1985. I put it in my tape deck and I couldn’t believe what I heard. It started with a minimal electro funk track, the next track was 80s funk with rap vocals, and then came a track entitled “Down At The Hilton”. This was EASILY the best Balearic jazz funk track I had ever heard. The warm sound, the melodies, the drum computer beats, the solos, everything was almost too unreal to believe. I really didn’t understand why Boberg and Simon never considered that some of their early works could be of interest to other people. But hey simply thought of it as some sort of learning curve remnants or simply forgot that the music existed.'

The story goes on – but we are going to end it here for now. Just feast your ears on this 7". Side A features the aforementioned “Down At The Hilton”, side B includes the equally great tune, “Curacao Blue”. Again, we get some Balearic feelings and sounds, a well arranged song, electro-ish beats, a long enduring keyboard solo in a Bob James kind of mood. Once you hear the songs we are sure that you’ll agree that the music by Ghia needs to be heard and shared with the world.

Matt says: Out-of-nowhere Balearic-jazz-funk greatness introducing this suave new band to our lugholes. More to come apparently too so watch this space.

Down At The Hilton
Curacao Blue