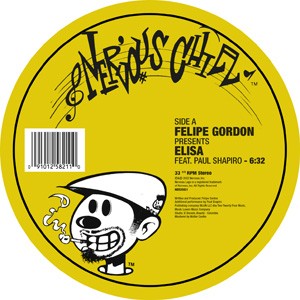 One of the keys to Nervous’ longevity has been our willingness to take chances on new producers and new sounds. As long as a track contains the essence of House, we encourage producers to experiment with combining House with other musical genres. And if the results are creative and fruitful enough we are always ready, willing and able to create a new sub label and logo to go along with a fresh sound.

In the 90’s we felt a movement toward House being juiced with Jazz elements and we created the Nervous Chill Sub-label. Now all these years later we are once again seeing a new appreciation for the sounds, flow and energy of Jazz on the part of some of the world’s premier House Music Producers, and so we are embarking on a re-launch of the Nervous Chill imprint.

Onboard for the re-launch is the very talented and dynamic producer Felipe Gordon with the two tracks “Elisa” and “Resonant.” Both songs feature the legendary musician Paul Shapiro, who has played a key musical role in many of House Music’s most celebrated tunes including “The Whistle Song” for which he supplied the eponymous “whistle.” “Elisa” features an uplifting and bouncy rhythmic vibe that’s topped and energized with Paul’s jazzy flute, while “Resonant” has a deeper and slightly more aggressive tone that’s propelled with Paul hypnotic and free wheeling sax instrumentation.