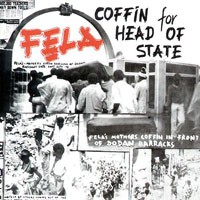 These masterpieces were pivotal accomplishments for Kuti, as they solidified his rise from mere social commentator to fiercely determined cultural leader. Recorded after the brutal raid of his Kalaluta compound and the consequent death of his mother, they comprise two of the most personal statements Kuti ever made. "Coffin for Head of State" denounces the corrosive effect of Christian and Muslim influence on African life and takes to task the leaders that perpetuate the "Bad bad bad things/Through Jesus Christ our Lord." It takes its name from a protest in which Kuti and a group of supporters laid a coffin on the steps of Christian leader Olusegun Obasanjo's Dodan Barracks, the headquarters of the military government. An epic 31-minute tribute to his fallen mother, "Unknown Soldier" is one of the most ambitious recordings of Kuti's career which describes in frightening detail the events that transpired on the eve of the Kalakuta raid, including the rape of several women, beatings, mutilation, and the throwing of his mother ("the Mother of Nigeria") out of a window. The official police report after the raid blamed the attack on "unknown soldiers," and in response to this fantastic cover-up, Kuti gives a tortured, powerful performance of some of his most vivid and incendiary music