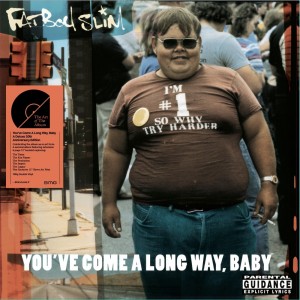 One of Fatboy Slim's crowning glories, "You've Come A Long Way Baby" saw the Brighton luminary take the big beat grenade and detonate it overground, taking the sound to the clubs, beaches, adverts and coffee tables of Great Britain and beyond. If you were conscious in 1998 it was impossible to ignore this album, with companies queuing up to align themselves with the coolest new trend in club land. Fatboy himself used the platform to elevate his Big Beach Boutique brand - two phenomenal parties on Brighton beach (the first seeing 65K revellers, the second - 250K!!); the likes of which sadly, I doubt, we will ever see again. I can personally remember exactly where I was the first time I heard "Rockafella Skank" and to me this is up there with "Dig Your Own Hole", "Music For The Jilted Generation" and "Homework" as one of the most iconic dance music albums of the nineties. I wasn't old enough to hear the tracks in the club, but its cultural impact travelled up and down the generational ladder from everyone at high school to people's Mum's cleaning the kitchen.

Exclusive anniversary sleeve notes from Ralph Moore (Editor at Large, Mixmag) and album timeline from Damian Harris (Skint Records).
Number one on the UK albums chart, number one in New Zealand, number two in Australia and number thirty-four on the US Billboard 200 containing four top ten singles. These tell a beautifully story much better than I can hear and really give creedence to this golden age of dance music that Norman was spearheading.

Ranked number 81 in Q magazine's readers' poll of the "100 Greatest British Albums Ever".

Matt says: Makin' me all teary eyed comes this 20th anniversary of THAT, seminal, big beat opus. The one that broke the sound overground, if you don't end up watching youtube videos of Brighton Beach I'll eat me slipmats...