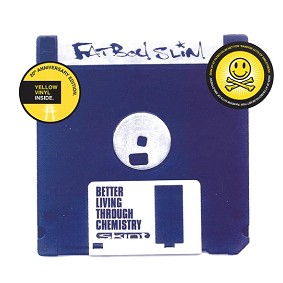 After enjoying a successful first decade in the music industry with The Housemartins, Beats International and Freak Power, Norman Cook put all of his other projects to one side in 1995, concentrating instead on new alias Fatboy Slim. After the 12" release of two killer club tracks, "Santa Cruz" and "Everybody Needs A 303", the Fatboy was ready to conquer the world and duly dropped "Better Living Through Chemistry" on Skint in 1996. As the set barrelled through a rapid fire succession of 60s soul samples, funk backbeats and wigged out synth action, Cook set about creating a new sound informed by all those rare nuggets he'd spun in Brighton's club scene. Taking hip hop's sampledelic spirit, the boundless energy of rave and the filtered brilliance heading over the channel from Paris' new breed, Cook laid the template for the chart topping, party starting, mainroom magic which would fill Britain's dancefloors for the next decade. It was the starting point of a roller-coaster journey that has gone on to include massive hit singles, multi-platinum selling albums, three Brit Awards, a Grammy, an Ivor Novello, 10 MTV Awards, the 2012 Olympic closing ceremony and worldwide DJ superstardom which continues to this day with a hectic schedule of DJ performances and festival headliner shows. This album celebrates where it all began - the brilliant original album - a seminal dance music moment in history, and expands on the story with a whole disc of bonus tracks including recordings from the Fatboy vaults that have never been released before.

Patrick says: What did I tell you?! Twelve months ago I was predicting the return of big beat, and here it is, beginning with one of the crowning moments in the genre. This was a massive album for me when I was growing up and it sounds just as banging now as it did then. "Give The Po' Man A Break" and "Everybody Needs A 303" are right back.