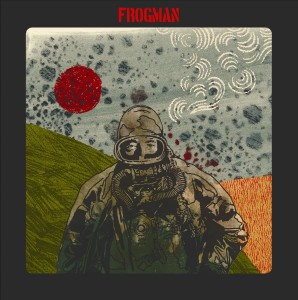 Unlike much you have heard before, Dean Honer and Supreme Vagabond Craftsman build a creepily paranoid world of ‘objects’, which is believable and strange… and strangely affecting.

“Set in a bleak corner of the Peak District, it’s perhaps our only opportunity to hear a one-time mainstay of Pulp and a former cast member of The Tomorrow People acting together in earnest. For that reason alone, surely it must be cherished. Submerged by analogue bleeps and beats, Russell Senior and Richard Speight throw themselves into two narrated suites of glorious post apocalyptic oddness.” - Bob Fischer, Electronic Sound He came up with Frogman. I loved that it was set locally to Sheffield in the Peak District, a place that I am very familiar with. That gentle yet dramatic landscape was perfect for an alien/viral incursion. It had the bleak English atmosphere of classics such as Quartermass and Threads.

Will Goddard / Supreme Vagabond Craftsman:
Staying in a B&B on the south coast about 15 years ago, I was given a map which the owner had hand drawn and photocopied for guests to find local chippies and nice pubs. The map featured a bizarre symbol among the spaghetti of wiggly lines depicting local streets: a sort of series of circles encasing triangles within a flaming star shape. It looked faintly occult. I went to the spot indicated by the symbol hoping to find some kind of spiritual inundation. It was a lorry park.

I particularly liked Christopher Priest's novel 'Fugue for a Darkening Island' and decided to rip off its fragmentary structure. I seem to remember buying a copy of Sam Delaney's 'Dahlgren' on the same trip. I liked the idea that a certain proportion of the world's population would be drawn into these religious pilgrimages and become a sort of shifting population of maligned devotees with an incomprehensible clicking language. This idea kicked around for a few years but I'm no good at writing fiction. When Dean mentioned a science fiction story with a sort of electronic score it seemed it could finally come to life.